Demons are enemies featured in Murdered: Soul Suspect. They are the enemies that Ronan O'Connor encounters in Dusk. They were once human ghosts, however, they have been corrupted and robbed of their souls by their time in the Dusk. Their only instinct is that, by consuming the souls of other ghosts, they can regain their own humanity.

Demons are very strong and can overpower Ronan if he tries to attack them directly. They will attempt to suck out his soul. Because of this, he must sneak up on them and destroy them from the inside out. Demons are outlined in red and can be seen through walls, making it easier to strategize executions and plan how to get behind them. They will make a loud shriek when Ronan first enters an area occupied by demons. If playing on the PS4, the Dualshock 4 light bar will be colored red when demons are nearby.

Ronan can also use his ability to possess living humans to hide from demons and time his executions, as demons cannot detect him while he is in the body of another human. However, in some cases, Ronan will still be pursued even if the player possesses a human.

Ronan may also be required to hide from the demons using spots of old ghost residue so that they cannot detect him.

If the player fails an execution, there is a short delay before the demon tries to attack Ronan, allowing him to hide or teleport away before they begin attacking him. Once detected, Demons will search hiding spots to find Ronan.

In addition to Demons, there are also Lost Souls. If Ronan walks into one, the Lost Soul will attempt to suck him down into the underworld. It is revealed at the end of Murdered: Soul Suspect that Abigail Williams has the ability to summon Lost Souls. 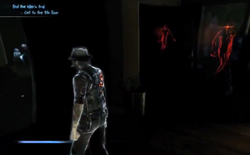 Demons outlined in red during gameplay.

Concept art of a demon. 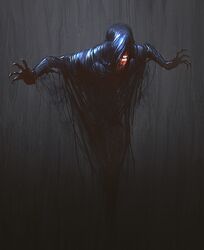 Concept art of a Demon.

Community content is available under CC-BY-SA unless otherwise noted.
Advertisement